3DPrinterOS will be teaching workshops at the 3D Print Expo in St. Petersburg

Our lead 3D/UI/UX Designer, Nikita Mokhirev, will be teaching 3D Printing workshops tomorrow through Saturday (June 7, 2015) at the 3D Print Expo in St. Petersburg, Russia. Nikita is the mind behind all of the ducks which have became synonymous with 3DPrinterOS.[caption id="attachment_1227" align="aligncenter" width="621"]

Nikita teaching 3D Printing in Tallinn, Estonia[/caption]Nikita's focus in the 3D Printing Industry is not just UI and UX design but also testing different kinds of 3D Printers as well. As part of the building the first operating system for 3D printing, we also print thousands of hours on 3D printers of all types. The ducks sprang up as an awesome object for testing printers ability to handle overhangs, resolution and infill.

As with many in 3D Printing, Nikita's path to today has been quite the winding road. He has a background in Power Engineering and has spent time working on numerous different projects, including an ad-campaign for the 2012 London Olympics. He has also collaborated with Craft Foods and many others.[caption id="attachment_1228" align="aligncenter" width="614"]

Nikita Mokhirev pictured here (2nd man in on left side of the screen) has won multiple awards for his innovative Web Designs and UI's.[/caption]In 2011, Nikita won the Judge's Special Award at the Fujitsu’s Winners of Design, where he made the Smile Cup.The "Smile Cup" contains a small interactive device that receives and sends instant messages, displays the time, works as a control, alarm clock or just a game centre. it communicates with others not just with words, but with images. ‘smile cup’ has screens on both sides that show an identical picture. by select the ‘face’ using the touch sensor located on the handle, a person that is next to you will see your emotion.[caption id="attachment_1226" align="aligncenter" width="620"]

Inspired by emoticons, this communication-based cup can convey information on the user's mood as they are enjoying a cup of tea.[/caption]Nikita also leads our visualization team which created and released our new and improved STL editor with feedback from the 3DPrinterOS community!

You can check out Nikita's duck designs by creating an 3DPrinterOS account!

Maxing out the Z-axis on the Makerbot Replicator 2 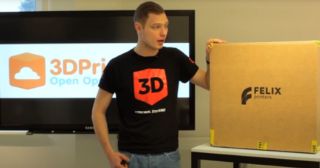