The Influence Of Education On The 3D Printing Industry 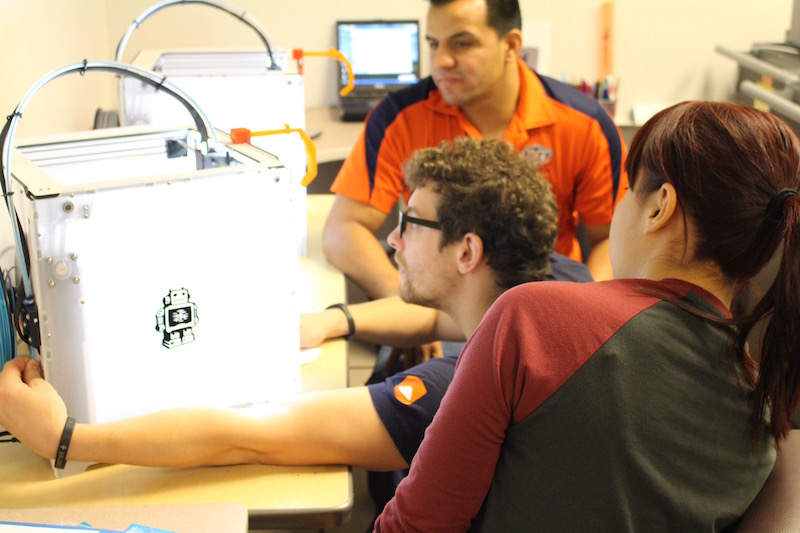 You probably don’t own a 3D printer yet. Like computers in the early 1980s, it’s an intriguing new technology that hasn’t quite found its place in the home.

However, schools and universities are proving to be a petri dish of innovation, where there is an existing space for experimentation and practical application, as well as palpable enthusiasm for the technology among both teachers and students.

Through the use of new software and Computer Aided Design (CAD), university and K-12 students alike can see their work come to life as it’s squirted magically into shape at the end of a heat-resistant nozzle. Students can build dioramas that genuinely excite: geometry has suddenly become physical and immediate, and math and science are no longer a hard slog through a dry textbook. Educators are harnessing their students’ creativity, and the next generation of designers, artists and scientists are being propelled in the right direction.But 3D printing is not simply a catalyst that improves the lives of fortunate children and young adults in the education system. The fact is, there’s a very effective feedback loop in operation right now, and the primary driver behind innovation and development in the 3D printing industryis coming from education. I’m going to talk about three ways in which 3D printing and educationare changing the world together.

In response to increased educational demand, CAD software has evolved dramatically in the last few years — and it’s not just engineers who are using it. Where before 3D printing was almost exclusively part of the manufacturing industry, demand for the technology in the classroom has pushed companies into developing technology to suit educational needs. As a result, there has been an explosion in the number of 3D design programs, especially for children, and this is allowing K-12 educators to make the most of the technology.Educational institutes are already using 3D printing at the middle-school level, allowing students to move away from the old-fashioned poster and cardboard projects toward more inspiring and practical 3D modeling experimentation.The Northern New York Robotics Academy’s Mars Colony project, for example, sees children using CAD software and a 3D printer to design and build Mars rovers, shape settler living quarters and build water supply resources. Not only is it fun, but it also is an educational opportunity to teach kids to use software and hardware.James Carroll, founder of the academy said, “The application of this technology is only limited by the ambition of the teacher and creativity of the students — and there’s no cap on either of those things here.”Carroll went on to say that 3D printing technology is revolutionizing education at the academy, giving students extraordinary levels of motivation and the opportunity to exercise their imaginations, as well as practice skills that will serve them in the future, in an exciting new way.Competitions such as the Edu-Tech 3D Challenge are helping children discover their design talents, as well as giving them the chance to showcase their work and potentially win a MakerBot Replicator 2 3D printing unit for their school.Moreover, apps like Zotebook.io allow children (or adults) to free draw their designs in 2D and see them converted into exact models, ready for 3D or laser printing. Although apps like this are simple, they make abstract theories practical, models testable and teach students how the 3Dprinting process works.For younger children, Dr. Fluff’s Robot Factory is a free and easy-to-use Android app that helps them create 3D models of robots. With apps like this, young children are learning to accurately manipulate images on screens, then see tangible results. Furthermore, teachers without access to 3D printers can send off for their students’ printed models in the mail, which, although perhaps not as fun to watch, at least adds an element of suspense to the class.Then there’s FormZ, software that uses tutorials and practical application to teach students how to design and model in 3D. FormZ comes with specific student licenses that allow high school and university students free access for 12 months, and gives them invaluable experience with professional software.Of course, there are many more programs and apps around, and far too many to mention here, but they do all have one thing in common: Although building a cardboard volcano in a shoe box is fun and educational, these apps and desktop programs are helping students develop valuable skills early in their educational lives. These are skills that can be applied in the real world and help them in their careers in the long run.

Breaking Down The Classroom Walls

Since the mid-1990s, the Internet has helped break down classroom walls with unprecedented access to information and communication. Now, 3D printing is adding a tangible element to the mix.

Teaming up students in K-12 and at the university level with international groups presents an interesting opportunity; it’s like the modern-day pen pal, but much more powerful. We’re seeing the beginnings of real-time collaboration among schools and colleges around the world, and — with 3D printing — project work will never be the same again. Files created for printing can easily be shared, which means that curriculums and even new subjects can be developed. Imagine a college classroom where the end project is not a hypothetical product but a real 3D printable solar panel design that can be printed for less than $30.

Take the recent success of the e-NABLE project as an example of the impact 3D printing can have on global design and production. The project began when a South African carpenter got in touch with an American prop maker in order to make a mechanical prosthetic hand for a young boy. After successfully creating the life-changing design, the pair then gave plans away for free in order to benefit people all over the world.The project has since grown into a global network of people setting out to help others whom they may never have met. For example, high school students from the Ben Barber Career and Technology Academy in Texas became involved in the project, collaborating to create a 3D-printed hand for Jayme Sims, a man who lost four fingers in a wood chipper accident. The prosthetic was based on the original e-NABLE design and only cost $50 to produce.We can now build educational courses where students in London, the U.S. or anywhere in the world can together collaborate on projects that have the potential to change the lives of individuals and groups on the other side of the planet.

With CAD software and 3D printers now being designed to meet educational needs, the marketplace is shifting shape. Students are now learning how to use free, simple programs likeTinkerCAD and are being taught to think in 3D in much the same way that many of us were taught how to use Microsoft Word from an early age.This fundamental shift in focus and development from the industry is creating a whole new class of adoption. Instead of just engineers making prototypes, we are now seeing artists using 3Dprinting to form beautiful and interesting objects and designs that would be nearly impossible to achieve through any other medium.Furthermore, it’s not just engineering schools picking up the tech; it’s reaching the general populace, too. Duke University is currently rolling out campus-wide access to 3D printing for its entire student body to offer the benefits of the technology to each and every one of its students.“In the first four weeks of being open our students have accumulated 1478 hours of 3D printingacross 601 print jobs. We did this using only seven printers and a small student support staff,” said Chip Bobbert, Digital Media Engineer at Duke University. “We hope not only to inspire our student body, but also to provoke new ways of thinking about problems and solutions. Technology like this has the power to change the way we see the world, and now is the time to embrace it.”With open-source designs, education and competition-driven innovation, we’re going to see anexponential rise in both application and development of 3D tech. The investment in the future of the technology that we’re currently seeing will reap untold rewards, and that come from this upcoming generation.

New innovation in 3D printing is not just going to come from the engineering elite; it’s also going to spring forth from diverse groups due to the widespread access that the education system is providing. Students are on the front lines of tech adoption, and the way students interact with 3Dprinting has changed the trajectory of the industry. As they learn how to design and print materials, they also are learning that technology itself opens the door to endless possibilities. Millennials and Generation Z are growing up with an entirely different mindset.